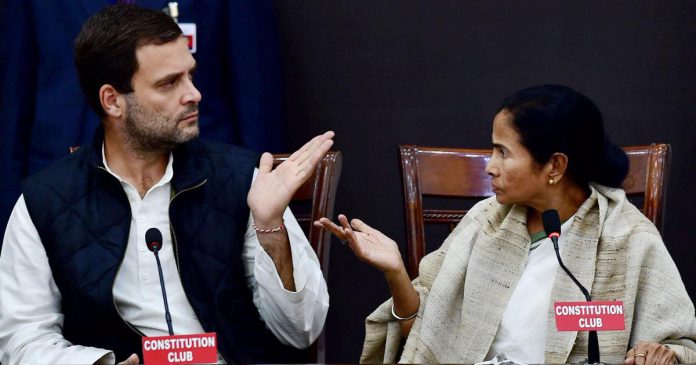 Will Rahul Gandhi retain as ‘Big Brother’ of the opposition parties Or Will Mamata Bannerjee take a national political role?

Will Rahul Gandhi retain as ‘Big Brother’ of the opposition parties Or Will Mamata Bannerjee take a national political role?

A big question has been arising- Why Mamata Bannerjee is giving jitters to Rahul gandhi?

CM Mamata Bannerjee’s recent Delhi visit to meet opposition leaders appears to have pushed the Gandhis to get proactive against the Modi government in Parliament.

Congress leader Rahul Gandhi invited other leaders of the opposition parties on August 2nd for a breakfast meeting at Delhi’s Constitution Club. It was to discuss a joint strategy against the Narendra Modi government for the monsoon session of Parliament, it was not an unusual move. Parliament has been in a deadlock over the Pegasus snooping controversy since the session commenced on July 19. Both the Lok Sabha and Rajya Sabha have failed to transact any significant business except the passage of some bills. This has been carried out without any debate or discussion. Though there are continued protests by opposition parties demanding a probe into the snooping issue, nothing has come out to be the end result.

With the Modi government reaching to no desicion, Rahul had reach out to other parties to chalk out a common strategy against the government in Parliament. Rahul invited all opposition leaders for a breakfast meeting. Unlike in the past, the Trinamool Congress (TMC), the fourth largest party in the Lok Sabha with 22 members, has agreed attend the meeting.

Political analysts believe that the political activism of TMC chief and West Bengal chief minister Mamata Banerjee at the national level is responsible for Rahul’s moves to forge unity in the opposition. Following a comprehensive victory against the BJP in the Bengal assembly election, Mamata has made it clear about her ambition to play a national political role.

Mamata claimed she had no intention of leading the opposition alliance but would work as a ‘soldier’ in the fight against the Modi-led BJP. But her party colleagues have openly projected her as the leader of any potential anti-BJP alliance. Mamata is keen on getting a national political role from the TMC’s focus on Tripura. Unlike Sonia and Rahul, she is acceptable to certain fence-sitting parties, such as the Telangana Rashtra Samithi (TRS) in Telangana and the Yuvajana Sramika Rythu Congress Party (YSRCP) in Andhra Pradesh. She also shares a good rapport with Odisha chief minister and BJD chief Naveen Patnaik and Bihar chief minister and Janata Dal chief Nitish Kumar.

The 2024 Lok Sabha elections are far away. While both Mamata and Rahul have made attempts to claim and reclaim the position of Modi’s prime rival, the immediate challenge for the opposition will be the assembly polls in Uttar Pradesh due early next year. With 80 Lok Sabha seats, UP will be a crucial state in 2024. The Congress, reduced to eight seats in the 2017 assembly poll, has yet to show significant signs of revival in the state. The TMC doesn’t have any electoral presence in UP.

Will the 2024 Lok Sabha election results see a new party apart from Congress or BJP? OR Will Congress come up as the ‘Big Brother’ of the opposition? OR Will the results again be in favour of the Modi Government? Let’s see in the upcoming years.