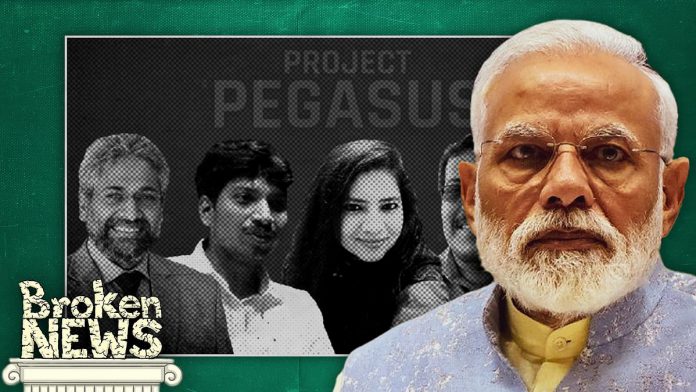 Pegasus, an Israeli-made spyware has been in the news recently for revelation of dozens of Indian’s information. The Congress party has accused Prime Minister Narendra Modi of “treason” and compromising the national security. Dozens of Indians were potential targets of snooping by Pegasus spyware.

According to Indian media’s reports, former congress president Rahul Gandhi, was one among the many Indian politicians, Activists and government critics as potential targets of the Pegasus spyware.

“Is spying on India’s security forces, judiciary, cabinet ministers, opposition leaders including Rahul Gandhi, journalists and other activities through a foreign entity’s spyware not treason and an inexcusable dismantling of national security?” Congress Alleged and raised in Parliament

Rahul Gandhi’s phone number appears to have been selected for targeting between 2018 and mid-2019, when the parliamentary elections were held in India. The congress party also demanded for an investigation into the roles of Modi and his closest aid, the home minister Amit Shah.

Among the Indian Phones that were targeted with the Pegasus spyware, was Ashok Lavasa, the former election commissioner of India who had faulted Narendra Modi for violation of the model code of conduct before the 2019 election.

Also, at least of the 11 phone numbers belonged to a supreme court female staff and her family. The woman had accused former Chief Justice of India, Ranjan Gogoi, of rape in April 2019 and was soon fired from her job. According to sources, these 11 numbers were surveilled in the same week when her allegations against Gogoi were reported. Gogoi is currently a government nominated member in the Parliament.

Along with all the politicians and businessmen, are 40 journalists across the country working for different organizations. Vijaita Singh, who covers internal security for The Hindu newspaper, is among them. According to sources, she was not aware of any intrusion on her phone.

Ritika Chopra who covers India’s election commission and education ministry for the Indian Express newspaper. According to sources she had not discovered about it until last week when The Wire called her for a comment on it.

The two ministers of the BJP party – Ashwini Vaishnaw and Prahlad Singh Patel, are one of the victims of the Spyware. Ironically, Vaishnaw, who was recently inducted as information technology minister, on Monday defended the government on the issue in the parliament, saying the expose was an “attempt to malign Indian democracy and its well-established institutions”. He also said that similar allegations were made earlier also but there is no factual basis to these.

The Politics of Pegasus what will be the impact

any how it had Ruckus in Parliament over Pegasus and the, opposition United to protest

Judicial Inquiry can dig deeper than IT panel Parliament inquiry,

IT Panel Parliament inquiry have its own limitations

this is breach of Trust of Indian people,

Now, let’s see this will bring solution to all the protests by the opposition party so far, or will it start a new chapter of protest for uniting of opposition.