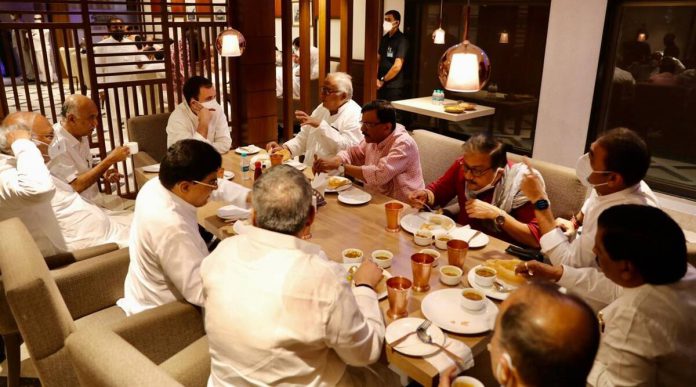 Today’s breakfast meet aiming at Unity of opposition against the Pegasus controversy.

After the Pegasus controversy erupting, the Opposition has been demanding a discussion in Parliament on the Pegasus row and its leaders have been giving adjournment notices every day.

Over 100 Opposition leaders today attended a breakfast meeting hosted by former Congress president Rahul Gandhi at the Constitution Club. The main agenda of the meet was to discuss of the Pegasus controversy and ensure opposition unity. Several opposition MPs led by Rahul later cycled to Parliament. This was done mainly to highlight the issue of fuel price hike. Some opposition MPs, who could not cycle, walked down to Parliament.

Apart from around 100 MPs, leaders of several opposition parties including Trinamool Congress, NCP, Shiv Sena, DMK, CPI-M, CPI, RJD and Samajwadi Party attended the meeting. Leaders of JMM, JKNC besides IUML, RSP, KCM and LJD were also present at the meeting. Leaders of 17 opposition parties were invited at the breakfast meeting. Amongst them, the Bahujan Samaj Party (BSP) and Aam Aadmi Party (AAP) did not attend the meeting. Trinamool Congress, which had skipped the last meeting of Opposition leaders by Gandhi, was also present at today’s breakfast meet.

In the meeting, Rahul Gandhi said that the single motive to invite all of them is to ensure unity. He says that the more this voice unites, the more powerful it will become, the more difficult it will become for the BJP and RSS to suppress this voice.

The Opposition has been demanding a discussion in Parliament on the Pegasus row from a long time now. Its leaders have been giving adjournment notices every day. The government has been saying that the opposition is creating a “non-issue” and the it minister has already given a reply in both Houses of Parliament.

Meanwhile, senior BJP leader and Defense Minister Rajnath Singh on Monday spoke to Leader of Opposition in Rajya Sabha Mallikarjun Kharge and sought his cooperation to end the impasse in the Parliament.

Both Lok Sabha and Rajya Sabha have failed to transact any significant business, except passage of some bills, amid continued protests by Opposition parties over the Pegasus since the Monsoon session of Parliament commenced on July 19.

Let’s see, if the Breakfast meet brings out to be fruitful for united opposition.