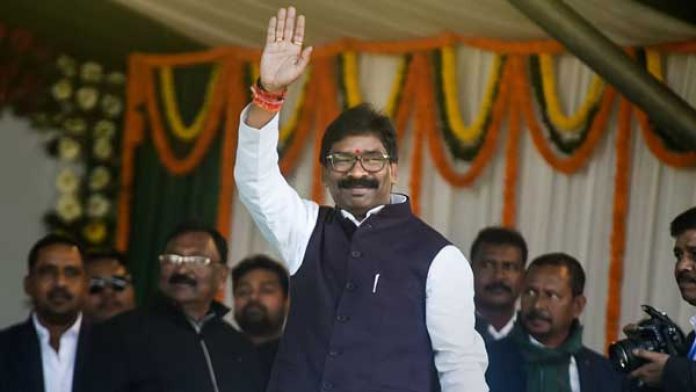 Three persons were arrested from a hotel in Ranchi on Saturday for allegedly conspiring to topple the coalition government of the Jharkhand Mukti Morcha (JMM), Congress and RJD in Jharkhand. The JMM claimed that the BJP was behind the conspiracy.

According to sources, 2 of the accused, named Abhishek Dubey and Amit Singh, are government employees. While the third accused, Niwaran Prasad Mahato is believed to be a liquor seller.

The special branch of Jharkhand Police seized cash from the three accused. The amount is still undisclosed.

Meanwhile, the JMM alleged that the BJP was trying to execute the ‘Madhya Pradesh’ and ‘Karnataka model’ in Jharkhand. It was with a reference to how non-BJP governments were toppled in these two states.

According to sources, JMM general secretary Supriya Bhattacharya says that The BJP is trying to apply the Karnataka and MP Model here in Jharkhand. But we won’t allow BJP to do the same.

The alliance of the JMM, Congress and RJD had won 47 out of the 81 seats in the 2019 Jharkhand Assembly election. Hemant Soren of the Jharkhand Mukti Morcha (JMM) was then appointed chief minister of the state.

The family of the accused claims it a foul play. The family of Niwaran Prasad Mahato has claimed that he is a resident of Bokaro and a vegetable vendor by profession. While, Abhishek Dubey’s family asserted that he too lives in the steel city and works as a daily wage laborer.

Their family members said that both were nabbed two days ago from Bokaro. The police had allegedly said that Abhishek and Niwaran would be released in an hour’s time.

However, the police have maintained that both of them were arrested from Ranchi’s Le Lac Hotel along with Amit Singh, who has been identified as a contractual worker of BSL.

The police have informed that the detained persons have confessed that they were involved in a conspiracy to topple the Jharkhand government.

According to sources, the Jharkhand Police said that the three arrested persons have confessed that they were conspiring to dethrone the elected government of Jharkhand. They have also accepted that they were trying to get in touch with political people to give them money.

JMM has not accepted it as a matter of money. They blame BJP to be behind the entire process.

It has also been speculated that without the help of political or powerful individuals, 3 random men cannot take such a big step against the Government.

Was it just a matter of money or did it actually involve powerful political names? It is still a question for many in Jharkhand. Let’s see what comes up as the conclusion in the upcoming days.