Uttar Pradesh's BJP state president Swantantra Dev Singh and state general secretary Sunil Bansal hold a meeting in Agra with senior leaders on Friday, October 1, 2021 to take stock of the preparations for the UP assembly elections in the Agra division. 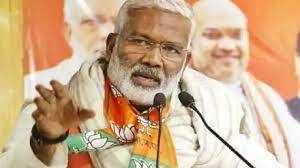 New twists in Uttar Pradesh’s politics. Uttar Pradesh’s BJP state president Swantantra Dev Singh and state general secretary Sunil Bansal held a meeting in Agra with senior leaders on Friday, October 1, 2021. The meeting was to stock of the preparations for the UP assembly elections in the Agra division.

Swatantra Dev Singh said that the non-BJP governments have always cheated and deceived the deprived classes. He says this is not only in Uttar Pradesh but across the country.

“The benefits of the schemes were always swept away by touts under non-BJP governments, whereas wherever the BJP governments were formed, the benefits of welfare schemes are reaching the eligible beneficiaries of the society without any discrimination and will continue to reach like this in the future also,” he said.

While addressing the state executive meeting of Anusoochit Jati Morcha of the party, Swatantra Dev Singh and Sunil Bansal said, “We are such a party that even a ward-level worker can reach the chair of the state president with his methodology, hard work and honesty. BJP never kills the rights of the deprived, whereas non-BJP parties have been swiping away that right from the deserving.”

Swatantra Dev Singh also gave election ‘tips’ to the division’s party workers regarding the assembly elections. He also said that in 2022, the BJP should get around 350 to 400 seats. “If development is to be spread evenly in the state, then BJP should continue to get the support of all castes,” he added.

Meanwhile, Sunil Bansal said that from October 6, teams in every district would be formed. He also said that following this only the person who works hard will survive.

He also said that after this, from October 7 to October 15, all the officials of the district, Braj region, and the state will become ‘Panna Pramukhs’. The Panna Pramukh will have the responsibility of taking a page of the voter list and posting it on social media besides personally communicating with each voter on that page, he says.

In response to a question, Sunil Bansal said that from October 1 to January 10, different events of a hundred works done so far would be organized in a hundred days. The party has set a target of gaining another one and a half crore members while keeping in touch with the old 2.5 crore members.

The fight for winning power in the Uttar Pradesh election has started in BJP in full swing now. Every party is giving it’s best to prove its worth for the state.