At present, Pranav Jha, AICC secretary in charge of communications, said Dr Singh is "undergoing routine treatment" and his condition is stable. He also dismissed "unsubstantiated rumours" regarding his health. 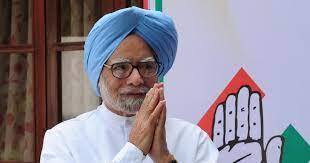 Former Prime Minister Dr Manmohan Singh has been hospitalised at the All India Institute Of Medical Sciences(AIIMS) in the national capital.

He has been admitted this evening after he complained of fever and weakness.

Earlier this year, during the second wave of Covid-19 infections, the 88-year-old Congress veteran and Rajya Sabha member had been admitted to hospital after he tested positive for Covid-19.

In May 2020, the former prime minister had been admitted to AIIMS, Delhi after he experienced chest congestion. He was under the care of Dr Nitish Nayak then too.

At present, Pranav Jha, AICC secretary in charge of communications, said Dr Singh is “undergoing routine treatment” and his condition is stable. He also dismissed “unsubstantiated rumours” regarding his health.

Soon after news of Dr Singh’s hospitalisation came, prominent Congress leaders took to Twitter to wish him a quick recovery.

Manmohan Singh first joined the Government of India as an economic advisor in the commerce ministry in 1971. He later served as the finance minister of India from 1991 to 1996 and went on to become India’s fourteenth Prime Minister in 2004. At present, he is a member of the Rajya Sabha.