Kangana sharing the video on her Instagram Stories wrote, “Aah! Vintage Bollywood.” She also added a bunch of heart emojis. 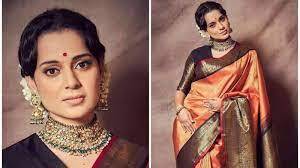 Kangana sharing the video on her Instagram Stories wrote, “Aah! Vintage Bollywood.” She also added a bunch of heart emojis. In the video, Salman and Madhuri are dancing together to the hit song.

The movie ‘Hum Aapke Hain Koun’ which was directed by Sooraj Bharjatyais is considered among the most successful Bollywood movies ever made. The movie was released in 1994.

Last year, Madhuri Dixit had praised Kangana as a good actor. According to sources, she said, “Kangana is a very good actress. She can get into any role and get into the skin of the role.”

Meanwhile, if we look into the past Kangana once spoke about refusing to work with Salman Khan in his film Sultan. She had said, “Knowing today’s times, I’ll go for something which will stimulate my mind, otherwise, I’ll be just sleepwalking through the film. Sultan, at that point of time, though it was a great character for a girl to play, I didn’t see anything for me in that.” She also added, “Coming from a double role space and doing so much more in my earlier films, I didn’t want to devote myself to something which wasn’t offering me so much. That’s why I didn’t do it.”

Kangana’s last release was Thalaivii. She played the character of late Tamil Nadu chief minister J Jayalalithaa in the movie. The film got a theatrical release and was later released on Netflix.

Meanwhile, her upcoming movies include Dhakad, Tejas and Ayodhya.