Priyanka Gandhi Vadra's actions might be seen as hope for revival of the Grand Old Party in Uttar Pradesh, but the BJP does not seem to really mind her actions in Lakhimpur Kheri, Uttar Pradesh. 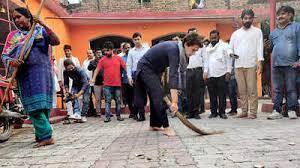 Priyanka Gandhi Vadra has been in the limelight for the last four days in Uttar Pradesh. She got detained in Sitapur en route to Lakhimpur, was sweeping the floor at the guest house there amidst a spate of interviews. She also reached Lakhimpur with Rahul Gandhi, was also sweeping the floor in a Valmiki locality on Friday. Meanwhile, a mega rally is now planned in PM Narendra Modi‘s constituency Varanasi on Sunday.

This might be seen as hope for the revival of the Grand Old Party in Uttar Pradesh, but the BJP does not seem to really mind Priyanka’s actions in Lakhimpur Kheri, Uttar Pradesh. This seems like a strategy of the BJP to make Priyanka ‘look like a factor’. Meanwhile, the major political opponents of the BJP in the state which are the Samajwadi Party and Mayawati’s BSP, dismiss Priyanka and the Congress as a “non-factor” with no voter base in UP.

According to sources, data shows that upper castes and Muslims have voted for the Congress in some measure in 2014, 2017 and 2019 in UP. But they did not vote in enough numbers to help the party make an impact.

The present political space being ceded to the Congress looks like a BJP effort to ensure that some of its own upper caste voters in UP who are upset with the BJP do not end up voting for SP or BSP, but go for the Congress. Similarly, it goes for stopping the consolidation of Muslim votes.

According to sources, UP Chief Minister Yogi Adityanath in an interaction on Friday asked why opposition leaders, including from the BSP, had not visited families of the “Brahmin men” who were killed in the Lakhimpur violence. At the same interaction on Priyanka sweeping the floor in Sitapur, his comment was that the “public has reduced her to that”. Meanwhile, this has prompted Congress to now launch a state-wide campaign, alleging that Dalits and women have been humiliated by the CM.

Meanwhile, the SP and the BSP both seem to have been left behind in the Lakhimpur episode. Such that, some leaders in these parties even allege a ‘fixed match’ between the BJP and the Congress. They have pointed out how Priyanka was allowed to proceed till Sitapur on Monday while Akhilesh was not even allowed to move out of his residence that day.

Now is Congress a threat to BJP or a threat to SP and BSP’s chances of winning the upcoming UP 2022 elections?