King Khan’s fans on social media say “Stay strong,” “It’s heartbreaking to see Shah Rukh Khan like this,” after seeing videos of him surrounded by security personnel, as he arrived at the Arthur Road jail. 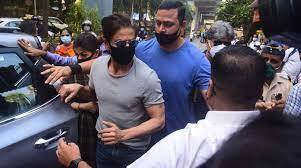 Aryan Khan’s bail plea was turned down by a special court on Wednesday. Meanwhile, just a day after that Shah Rukh Khan met his son Aryan Khan in the Arthur Road jail on Thursday.

King Khan spent around 18 minutes with his son and used the intercom to interact with him at the inmate meeting section of the jail. Sources say Aryan Khan looked emotional during the meeting.

Well, this was the first time Aryan met any family members after his arrest by NCB in the Mumbai cruise drug bust case.

However, the meeting took place in the presence of jail authorities. An inspector-level officer was also present at the spot. The area was vacant at the time Shah Rukh Khan visited due to security reasons.

The internet is rather emotional after watching videos of a visibly upset Shah Rukh Khan, photographed at the Arthur Road jail in Mumbai on Thursday. As videos and pictures of Shah Rukh Khan, 55, surfaced on the internet, fans offered words of support to the Bollywood superstar on social media.

According to new Covid-19 guidelines, In-person meetings are only allowed from today. Earlier, only video calling was allowed which was in practice for over a year.

There is a Procedure to have a meeting. Relatives or advocates first have to inform the jail officials that they want to meet prisoners or under-trials lodged inside the jail. Once this is done, the jail officials give the timing. The person who is coming to meet has to submit his or her Aadhaar card to the jail officials who then note down the details. A token is then given. The relative has to show the token while going inside.