HomeEntertainmentAnanya Panday denies that she agreed to arrange 'ganja' for Aryan,...
Entertainment

Ananya Panday denies that she agreed to arrange ‘ganja’ for Aryan, said ‘was joking’

Ananya was summoned by the NCB after they had received a chat conversation between Aryan Khan and her regarding drugs. 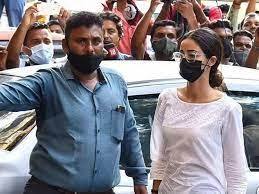 Bollywood actor Ananya Panday is being questioned by the Narcotics Control Bureau (NCB) over her chats with Aryan Khan. Sources say she had agreed to arrange ‘ganja’ for him.

According to sources, NCB has recovered chat messages of a conversation between Ananya Panday and Aryan Khan in which the two were discussing procuring ganja.

NCB sources have said, “At one point in the conversation between Aryan Khan and Ananya Pandey, Aryan was talking to Ananya about ganja. Aryan was asking if there could be some ‘jugaad’ to arrange the weed.”

Meanwhile, to this, Ananya Panday replied, “I will arrange”.

However, Ananya Pandey on Thursday during the questioning replied, “I was just joking,” when NCB showed her this chat.  Ananya was summoned by the NCB after they had received a chat conversation between Aryan Khan and her regarding drugs.

Meanwhile, A team of NCB officials reached Ananya and Chunky Panday’s residence in Mumbai on Thursday. After which she was summoned for questioning. Sources say the probe went on for about 2 hours in the evening. However, Ananya Panday has been called for questioning again on Friday.

According to NCB, no such evidence has been found so far that could prove that Ananya Panday had ever arranged any drugs for Aryan Khan. Whereas, there have been many conversations between Aryan and Ananya regarding drugs and contraband.

On Thursday, during the first round of interrogation, Ananya Panday had reached the NCB office with her father, Chunky Panday. Before entering the interrogation room, Ananya was very nervous and had also cried in front of Chunky Panday.

Chunky Pandey was asked to sit outside when he and Ananya Pandey reached the NCB office on Thursday. According to sources, Investigating officer VV Singh, NCB Zonal Director Sameer Wankhede and a female officer were present at the questioning.

Ananya Pandey told the NCB that she had studied with Aryan Khan at the Dhirubhai Ambani International School. Aryan Khan’s sister Suhana is also a very close friend of Ananya. She said that they are all family friends.

Ananya also told the NCB officers, apart from the shooting schedule, they all meet up and hang out together. Meanwhile, Ananya said to the NCB officials that she had never consumed drugs, or supplied anyone.

When NCB officials asked about the chats on drugs, Ananya Pandey said it was about cigarettes and not weed. She also told the NCB officials that she doesn’t know if weed is also a drug.