India will face Pakistan in their opening game of the ICC Men's T20 World Cup 2021 on Sunday. The match will be held at the Dubai International Stadium. 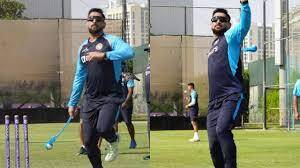 MS Dhoni on Friday provided throwdowns to India batters ahead of their opening match in the ongoing T20 World Cup. India will face Pakistan in their opening game of the ICC Men’s T20 World Cup 2021 on Sunday. The match will be held at the Dubai International Stadium.

According to sources, Team India is sweating it out in the nets and is making sure they leave no stone unturned for the opening clash ahead of the match. Dhoni has been appointed as the mentor of the team for the T20 World Cup. He was seen giving throwdowns in the nets on Friday.

Considering MS Dhoni’s experience as a former captain, his role will be crucial to Team India. Meanwhile, Legendary cricketer Sunil Gavaskar feels the CSK skipper will help the players in the changing room but they will have to perform the actual task in the middle.

Sunil said, “Maybe speak to batters and bowlers during a time-out, so the move to employ Dhoni is a good one but Dhoni will be in the change room and it’s the players who have to perform the actual task in the middle. How they handle pressure would determine what the result will be”.

India, champions in the inaugural edition played in South Africa in 2007 and finalists in 2014. Meanwhile, India will also have Afghanistan, New Zealand in Group 2.

However, in the qualifiers, Namibia made history by qualifying for the T20 World Cup 2021 Super 12 stage in their very first appearance at the tournament after beating Ireland on Friday.

Namibia timed their chase of Ireland’s 125 for eight to perfection. It was a half-century from skipper Gerhard Erasmus and pyrotechnics from David Wiese led Namibia to a phenomenal eight-wicket victory.