Momin has captioned one of his videos as, “Mujhe Kuch samaj nai arahi!! Main khushi se pagal ho jao ga (I can’t understand anything! I will go mad because of this happiness).” 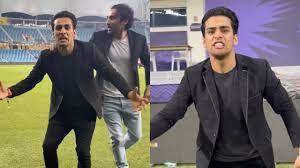 Team India suffered a 10-wicket defeat against Pakistan in the Group 2 match of the ICC Men’s T20 World Cup on Sunday in Dubai. Certainly, this was not the kind of outcome Indian cricket fans had expected. However, we have to laud the Pakistan cricket team’s swashbuckling performance in India vs Pakistan match.

If we talk of India vs Pakistan match, we all remember the viral meme guy from Pakistan Momin Saqib whose epic rant in the year 2019 after Pakistan lost a match against India went viral on social media. Well, Momin was present this time too at the Dubai International Stadium on Sunday to witness the historic event and needless to mention he was elated.

The viral Pakistan meme guy Momin Saqib shared a slew of videos on Instagram after Pakistan’s historic win against India. He was seen in a celebratory mood and had been sharing incessant videos to celebrate Pakistan’s win. In one of the videos, he was also spotted with Akshay Kumar. Akshay Kumar was also present at the stadium to watch the match.

Meanwhile, Momin has captioned one of his videos as, “Mujhe Kuch samaj nai arahi!! Main khushi se pagal ho jao ga (I can’t understand anything! I will go mad because of this happiness).”

Well, here are some of the videos Momin Saqib shared after Pakistan’s win against India on Sunday:

Meanwhile, Momin Saqib had also shared a video ahead of Sunday’s match.

However, yesterday’s victory was Pakistan’s first-ever victory by 10 wickets against any opposition in a T20.