In August, social media was floated with the news of Katrina Kaif and Vicky Kaushal's engagement. Most recently, another report suggested that the couple are prepping for their wedding ceremonies and will tie the knot in December. 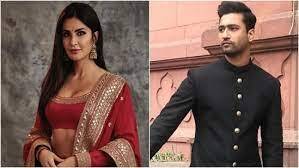 Katrina Kaif has recently denied rumours of tying the knot to Vicky Kaushal this year. A report had recently suggested that the two are already prepping for their wedding ceremony. However, during a recent interview, the actress put a rest to the rumours and denied all the rumours. Katrina Kaif and Vicky Kaushal are rumoured to be dating since 2019, but they have remained tight-lipped about their relationship status.

In August, social media was floated with the news of Katrina Kaif and Vicky Kaushal’s engagement. Most recently, another report suggested that the couple are prepping for their wedding ceremonies and will tie the knot in December.

However, during a recent interview with BollywoodLife, Katrina Kaif clarified that there is no truth to news of her and Vicky Kaushal’s marriage in December. When asked about why she thinks the rumours started in the first place, the actress said, “That’s a question I have for the last 15 years.”

Meanwhile, the report said that Katrina Kaif and Vicky Kaushal will tie the knot in November or December this year. It also said that their wedding outfits are being designed by Sabyasachi. The sources had said, “The wedding will take place in November-December.”

Another source had said, “Their wedding outfits are being designed by Sabyasachi. They are currently in the process of choosing fabrics for the same; Katrina has chosen a raw silk number for her ensemble, which is going to be a lehenga.”

Well, for the record, Katrina Kaif and Vicky Kaushal are often spotted together. Recently, Katrina was seen at the special screening of Vicky’s latest outing, Sardar Udham in Mumbai. On October 27, the couple were clicked at their manager Reshma Shetty’s office.

Facebook
Twitter
Pinterest
WhatsApp
Previous articlePaytm IPO to open for subscription on November 8
Next articleNITI Aayog gives a green signal to conduct a study on the use of facial recognition technology in India.