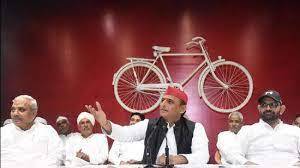 The development comes ahead of the Uttar Pradesh Assembly elections scheduled to be held early next year.

However, Sources say that one more MLA of Apna Dal (S) may switch over to Samajwadi Party soon. The Apna Dal (S) is a BJP ally. The Apna Dal (S) MLA, who is speculated to join SP soon, is said to be Dr RK Verma. Verma had worn a red cap during the recent elections of Deputy Speaker of Uttar Pradesh assembly and had even cross voted for an SP candidate. However, sources suggest that Verma may officially join SP in a function in the Pratapgarh area later on.

Meanwhile, Sitapur MLA Rakesh Rathore resigned from the BJP and joined the SP on Saturday.

Also, the Samajwadi Party and Suheldev Bhartiya Samaj Party struck an alliance on Wednesday to counter the ruling BJP in next year’s Uttar Pradesh Assembly elections.

The announcement was made by SP chief Akhilesh Yadav and SBSP president Om Prakash Rajbhar at a massive rally held in Mau, thronged by supporters of both parties.

The SP leader also hit out at the ruling dispensation by terming them a “conspiracy of liars” who only know how to loot the people. He also attacked the BJP over inflation, rise in fuel prices and the Covid-19 crisis.