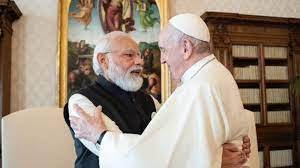 Prime Minister Narendra Modi met Pope Francis on Saturday as part of his Rome visit for the G-20 Summit. This was PM Modi’s first-ever one-on-one meeting with Pope Francis.

PM Modi and the Pope have discussed a wide range of issues aimed at making the planet better. This certainly included fighting climate change and removing poverty. Meanwhile, the prime minister has also invited Pope Francis to visit India.

According to sources, the meeting was scheduled only for twenty minutes but it went on for an hour.

The last papal visit had happened in 1999 when Atal Bihari Vajpayee was the prime minister. This was when Pope John Paul II came to India. Now after years, it is during PM Modi’s term that the Pope has been invited to visit the country.

Meanwhile, PM Modi also interacted with members of the Indian diaspora in Rome on Friday evening.

Modi said, “During my visit to Italy, I will also visit the Vatican City, to call on His Holiness Pope Francis and meet Secretary of State, His Eminence Cardinal Pietro Parolin.”