While granting Aryan's bail on Thursday in the drugs-on-cruise case, the Bombay High Court imposed 14 bail conditions on him, paving the way for his release from jail 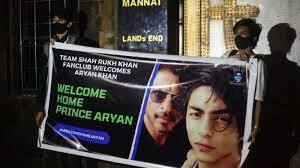 Aryan Khan was released from the Arthur Road Jail on Saturday, October 30. The Bombay High Court granted bail to Aryan along with Arbaaz Merchantt and Munmun Dhamecha on October 28.

They were arrested by the Narcotics Control Bureau (NCB) following the drug bust on Cordelia Cruises’ Empress ship. Aryan bail on Thursday in the drugs-on-cruise case, the Bombay High Court imposed 14 bail conditions on him, paving the way for his release from jail

Meanwhile, Shah Rukh Khan’s fans and followers once again took to Twitter to show their support for the actor and his family. Twitter users celebrated Aryan’s release from jail with heartfelt messages on social media. Also, Twitter is flooded with posts in support of Aryan Khan.

Aryan Khan, 23, is Shah Rukh Khan and Gauri Khan’s elder son. Aryan Khan had to spend two extra nights in jail despite being granted bail by the Bombay HC. That’s because the detailed court order was still pending. Now that the paperwork is complete, Aryan returns home after three weeks since he was detained on October 2.

Also, Shah Rukh Khan had earlier requested his industry friends not to land up at Mannat to ensure security. SRK’s manager Pooja Dadlani has also requested the same. According to sources, SRK himself had been staying away from Mannat to ensure security. Now, it seems Aryan too will be staying put at home and not step out of Mannat. Meanwhile, Pooja Dadlani has especially requested the family’s friends to avoid coming to Mannat over the weekend to meet Aryan Khan.

Facebook
Twitter
Pinterest
WhatsApp
Previous articleWhatsApp to not support on Some Android Phones From November 1
Next articlePM Modi discusses climate change, poverty on meeting with Pope Francis in Vatican city